So, with the Presidential election right around the corner, it  looks like we’re getting down to the wire, and the man, and woman that you see here can possibly be your next first family. I never would have thought that Donald Trump the man who seems to never get along with anyone would possibly be the next President of the United States. In fact, just check out the public feud that Trump had with Rosie O’donnell. Now, I’m not really one who would criticize anyone, but to think that we’re going from Barack Obama to Trump, well that’s kind of drastic.

Now, don’t get me wrong it’s not over yet, and Hillary Clinton isn’t a good bet either. I really can’t believe that out of all the most qualified candidates in this country we wind-up with what we now have. I do notice that Trump does have a movement behind him. In some ways I would liken his movement in comparison to what Barack Obama had when he first came on the scene.

Trump Knows exactly what to say in order to get his audience pumped up.

He has charisma, he has his own way of delivering a speech that captivates audiences, and I must say he speaks his mind. The man isn’t afraid to really say what he feels, and I guess to his audience this is a plus. Now, I’m independent, but I like to view myself as someone that’s on the outside looking in, and I have to admit that Donald Trump knows exactly what to say in order to get his audience pumped up. He says all the right words that will make his audience feel like he’s the right guy for the job.

Now, do I think he’s the right guy?

Well it’s not up to me, but the real question is, will the American people think he’s the right guy. His whole “Make America great again” Slogan is what’s  helping him, even though anyone with common sense can see the racial undertones that the slogan holds, but that’s for another post.

Trump is nothing more than a reflection of his supporters.

Right now, I’m trying to make you see the movement that propelled a radical candidate like Trump into the position that he’s now in. We are literally on the verge of a Donald Trump presidency. To think that millions of people who  think like Trump still exist in today’s era is somewhat scary for most, but I always knew that element existed in this society.

Trump is nothing more than a reflection of his supporters who are finally happy that someone who thinks, and talks like them have came out of the dark, and is now mainstream. Just look at his numbers, although at various moments he’s up and down in the polls that’s not what you should look at. Look at his attendance record. It’s fair to say that the Donald does have a following, but the real question is this here.

Do you think Donald Trump has what it takes to be President?

Is it professional for him to speak his mind, or should he be a little politically correct?

Well to put things in a different perspective, Trump isn’t politically correct and his supporters are perfectly fine with that. One thing that I must say is that Trump really does speak his mind. You might not like the man, but he doesn’t hold anything back. He says whatever comes to mind, and although at times he may seem radical his supporters are eating it up.

I think we can admit that the Donald is the ultimate salesman.  He sold this idea of  “Making America great again,” as if Obama ruined it from being great, and his supporters are completely sold on the idea that Trump can restore America back to greatness. We will certainly see how this one plays out. 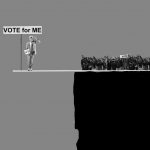