The embattled Boko Haram leader Abubakar Shekau has posted a video saying he was alive and well, weeks after officials stated he was seriously wounded. The militia chief is also in open conflict with the “Islamic State.”

The video, posted on social media on Sunday, shows Shekau in apparently good health and pointing to a date on an Islamic calendar corresponding to September 25, 2016.

“You broadcast the news and published it in your media outlets that you injured me and killed me and here I am,” he said in an address in Arabic and Hausa, which is widely spoken in northern Nigeria.

“Oh tyrants, I’m in a happy state, in good health and in safety,” he added.

The Nigerian army had previously announced that Shekau was seriously injured in an air raid on August 23, when several top commanders of the Islamic militia were killed. Some reports claimed the wound was fatal. In the past, Nigerian officials have repeatedly stated that Shekau had been killed.

“I will not get killed until my time comes,” Shekau said in the video published on Sunday.

Shekau’s rival endorsed by IS

Shekau had pledged alliance to the self-declared “Islamic State” (IS) group in 2015. However, only days before the government’s bombing last month, the IS announced there was a new leader of the Nigerian-based militia. This was quickly disputed in a clip by Shekau, exposing divisions within the group.

The IS-promoted leader, the 22-year-old Abu Musab al-Barnawi, is a son of Boko Haram founder Mohammed Yusuf and an ex-protégé of Shekau. He has publicly criticized his former mentor for killing too many civilians, including Muslims.

Clashes between rival clans have also been reported near Lake Chad.

‘Bring back our brethren’

Shekau has maintained he remains the leader of the seven-year insurgency.

On Sunday, he also threatened President Muhammadu Buhari, and referred to the negotiations to free the Chibok schoolgirls kidnapped in 2014. 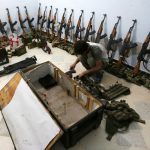