The
other day I was listening to the radio, and for a moment I thought I was listening to a Klu Klux Klan rallying song. I had to check the station, and see what the song was, and it wasn’t made by a Klansman, but it was the work of a black male.
The
song promoted so much hate towards black males that at first I was mind-boggled.

Every other word was Nword get killed this, Nword will get killed that, and I hate this Nword. I mean the song was polluted with hate messages, and it was from a black male speaking about another in such a vile way. It seems like black men have developed a real disdain for each other. I immediately thought to myself, now just imagine if these exact lyrics were used by a person of another race. Would major controversy ensue?

Black men have this great level of distrust, discontent, and hatred for each other that comes across as just black men being “gangster” to some.

Would the black community get all angry, and scream racism, and discrimination if these very same lyrics came out of the mouth of someone who wasn’t black? Most likely they would, but why? Is this what being black in America has come to, especially being a black male. It seems we are only angry when someone else who may be a few shades lighter says racial remarks, but many black men will disrespect each other on a regular basis, and it seems as if its. It will be so normal as if it was just business as usual, but when someone else says it that isn’t black, the whole we aren’t going to take this, and let’s go stand together theme comes out.

The
real question here that we should be asking is this. Why are so many black man so comfortable with openly disrespecting each other? Why is that? We can’t possibly be a people who takes pride in how we disrespect each other, but then turn around and call another race of people racist when they display the same treatment to us that we display to one another. I know that this isn’t what a long civil rights struggle was fought for. Black men have this great level of distrust, discontent, and hatred for each other that comes across as just black men being “gangster” to some.

That’s why you can see them openly insult one another, and no one will say a thing. I know that we can’t be a culture of young destructive people, and well we shouldn’t accept that.
The
time to change should be now because if you think that this is the way it’s supposed to be, then you’re wrong! Think about the music, and take some of those lyrics and imagine how the Klan would be laughing because the very things that the Klan did to those who came before us is exactly what many of the songs played on the airwaves today are promoting. 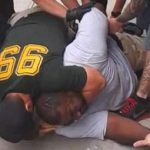 Deutsche Welle: Reports Cross-border firing between Indian and Pakistani troops have claimed the lives of at least two P...