Cross-border firing between Indian and Pakistani troops have claimed the lives of at least two Pakistani soldiers in the disputed region of Kashmir. Tensions between the nuclear-armed neighbors are rising.

The warmongers in India and Pakistan thrive on the Kashmir conflict. Experts say that the business-minded premiers of the two countries, Modi and Sharif, need to take matters in their own hands and isolate the hawks. (26.09.2016)

India to use chilli shells instead of pellets against Kashmir protesters

Two Pakistani soldiers were killed Thursday in an exchange of fire with Indian troops at the de facto border in the disputed region of Kashmir, the Pakistani army said. Pakistani forces “befittingly responded to Indian unprovoked firing,” the statement said.

Both sides blame each other for starting the gunfire.

Pakistan troops fired at Indian posts in Nowgam sector of North Kashmir at midnight. They also fired mortars. Army at the LoC (line of control) fired back and intermittent firing is going on,” an Indian army officer told Reuters news agency on condition of anonymity.

An estimated 100 people – mostly civilians – have died on both sides in border skirmishes since early 2013. The cross-border skirmishes come as tensions are rising in Indian-administered Kashmir as Indian security forces struggle to contain widening unrest among the Muslim-majority populationagitating for independence or union with Pakistan.

Words and bullets fly over frontier

Both New Delhi and Islamabad have used the Kashmir unrest to their political advantage. Pakistan recently warned that India would “disintegrate” after Kashmir gained independence.

“The ceasefire violation proves that Pakistan is determined to reject international rules. This will be taken up to all global forums,” an aide to Modi told Reuters news agency on condition of anonymity.

Meanwhile, India says its military has carried out “surgical strikes” along the line-of-control dividing Kashmir to thwart a series of attacks being planned against major cities. He said the Pakistani military had been informed of the operation against the militants.

“Some terrorist teams had positioned themselves at launchpads along the line-of-control,” Lieutenant General Ranbir Singh, the army’s director-general of military operations told reporters in New Delhi. “The Indian army conducted surgical strikes last night at these launchpads. Significant casualties have been caused to these terrorists and those who are trying to support them.”

Both South Asian countries claim Kashmir in full but govern separate parts, and have fought three wars since independence from Britain in 1947, two of them over Kashmir. 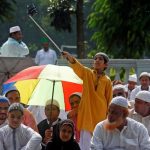 'Selfie deaths' on the rise in India

'Tens of thousands to stand trial in Turkey'

Deutsche Welle Reports: Turkey has said 32,000 have been detained over links to Fethullah Gulen, who Ankara blames for t...