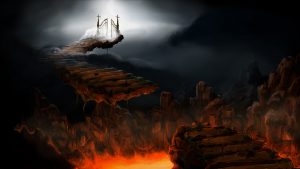 If you were to mention the word “heaven” to a group of people I am sure that the majority of people will give you a definition of heaven that goes something like this.

“It’s a place where people who were good people go after they die, and they will get to see God and live in all of eternity in bliss beyond wonderful pearly white gates”

After all, this is the definition that many of us were taught in schools, and this is something by no fault of our own we all have become accustomed to.

Now let’s reverse this question and ask them about hell. This is when you will probably get the opposite description of heaven.

You will probably get answers that will tell you how hell is a dark place with burning fire, and torture.

Hell without a doubt will bring on stories of pain and a place no one wants to go, and this is another result of reprogramming that we all received from a younger age.

Every church on the planet will teach how hell is a place where the devil resides, and how it’s a place where only the bad people go after their death.

A place where someone will burn for all of eternity for all their wrongdoings, and although this sounds justifiable especially if a person lived a life where they were deplorable human beings.

Now let’s look at how both were constructed by the religious elite to create control over society.

In fact, it was quite easy to control someone when they believed in their heart that if they went against the power to be or the religious authority they would be punished for all of eternity.

If you asked me, and from my studies, I would go with the idea that both are constructs created to maintain the order of society.

Hell and Heaven are both states of mind and states of consciousness, so let me explain exactly why I say that.

A person can be in abject poverty with no hope in sight of anything changing.

They can also be a great person as in paying their taxes, always helping another, but because they haven’t cleared their consciousness, they’re stuck in hell.

A physical hell on earth where they’re constantly being burned by life and can’t seem to find a moment of tranquility.

They’re always getting beaten by life and are being denied the opportunities that they feel are supposed to be theirs.

This is a living hell, and to tell them that they will go to heaven after they die is a horrible thing to say.

It is a state that many live in, and until someone really awakens they will always find themselves in “hell” or in a “living hell” where there is no hope of a better world.

Hell is where you live when you feel like life is going downhill and no one is there to help.

Hell is having all the bills pile up, and not knowing how you’re going to pay them.

Hell is when you are heartbroken and find out you were giving all your loyalty to a deceitful lover.

Hell is where friends who you thought were there for you weren’t and wound up backstabbing you.

Hell is working two or more jobs and still finding it hard to make ends meet.

Hell is where you become numb to life,  and turn into a negative Nancy or a negative Ned and always find the faults in everything.

Hell is a nasty feeling that tells you that you aren’t good enough, so you believe this feeling and allow it to become your dominant thought and then you wind up believing it and never becoming good at anything because you believed the lie.

Remember the devil is a liar, as satan means “adversary” in Hebrew.

The adversary of GOD is satan, so knowing this we can see that if “I AM” is equal to the name of GOD then every lie that you tell yourself is the adversary of the GOD that lives within you, and it will defeat you at every step.

Stick with the idea that the world is getting worst and your world will only get worst. The devil shows his face to those who openly accept him.

When I say “his,” and “him” I’m only using the masculine force that society as a whole projected this figure to be as there is no physical devil, but in theory, the devil lives among us as an accepted idea that so many will openly embrace.

Take that thought in mind next time you doubt yourself or accept the lie that life is supposed to be anything less than what makes you happy..

Think about that for one minute and remember to come check out the latest book “21
Biblical Metaphysical Techniques To Tap Into Your Inner GOD” here.

When no harm is known

The beauty of meditation is that it offers a wide range of health benefits especially for the heart as seen...